Sue Stone: From conception to creation 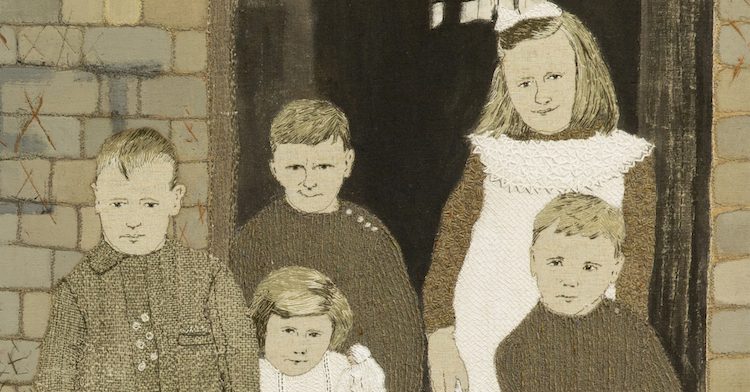 Sue studied Fashion Design at St Martins School of Art and then Embroidery at Goldsmiths College in London in the 1970s. After many years working as a clothing designer, Sue became a full time professional artist in 2003. She is current chair and exhibiting member of the UK based but internationally renowned 62 Group of Textile Artists and a Fellow of the Society of Designer Craftsmen. Her work has been exhibited widely across the UK and Europe, and as far afield as Japan and the USA.

In this interview, which is the first in our brand new ‘From Conception to Creation’ series, Sue Stone discusses the evolution of the piece ‘The Unknown Statistic’, which was inspired by the death of an ancestor and originally displayed in the historic setting of the Grimsby Minster. The spark of an idea

Sue Stone: My hometown of Grimsby is situated on the east coast of England and was, in the 1950s and 1960s, well known worldwide as a fishing port. The flow of people to the town in its heyday gave it a reputation as the ‘Klondyke of the east coast’. In 2014 the 62 Group of Textile Artists exhibited in Grimsby, Lincolnshire, UK at two very different venues: Grimsby Minster, a beautiful historic building that has evolved over many hundreds of years and the Muriel Barker Gallery at Fishing Heritage Centre, a modern white walled gallery.

The 62 Group members were invited to respond to the town of Grimsby by interpreting the theme ‘Ebb & Flow’ in its widest sense. The year 2014 also marked the centenary of the beginning of the first world war. My own work for the exhibition, ‘The Unknown Statistic’  which was shown in the historic setting of Grimsby Minster, was a narrative piece; a response to a family story, in particular, it was something that came from my research into World War I. I knew my great-grandfather, Harry Conder, had died during the war as his name is on the memorial at Tower Hill in London. What I now discovered were the circumstances of his death, that he was skipper of the trawler ‘Fittonia’ and had drowned when the trawler hit a mine and was sunk on 2 September 1914 with seven lives lost. This discovery sparked an idea and I sought out a small image of some unknown children that I had seen in my husband’s family album. I wasn’t quite sure how I would use this image until I came upon a photograph I had taken in the East End of London, simple graffiti on a wall which said ‘Never Forget’. Sue Stone – photo of kids in a doorway Having found out how my great-grandfather had died in 1914, I also found he was father to seven children. Harry’s eldest son, Charles, also lost his life to WWI. He died on 2 November 1918, just before the end of the war; not from the war wounds he sustained and from which he was recovering well, but from the Spanish Flu epidemic. Each year we commemorate those brave men and women who went to war and never returned, but this piece is primarily about those that were left behind when the war ended. We don’t always remember what they went through and how their lives were changed by their experiences. I wondered how many more children had been left fatherless by the First World War. I researched the local and national archives and discovered a decided lack of accurate information. The figures recorded varied widely and I had found my title ‘The Unknown Statistic’.

My preparatory work always takes the form of a long period of thought, followed by the selection of images to make the composition, which starts life on the computer screen. The two images I had selected to form a narrative were combined in Adobe Photoshop. The piece has an imagined ‘back story’. The image of the unknown children from my husband’s family album became a device to represent a group of universal children, those innocents whose lives were changed forever by the loss of their father. The children stood in the doorway, watching and listening. The shadow of their mother can be seen in the background. She couldn’t bear to come and watch. Their father whistled as he walked away to war. He was a skipper, a Grimsby fisherman, whose trawler had been commissioned by the government for war purposes as a mine sweeper. A fisherman didn’t turn around to wave to his children as he left, because that was deemed to be bad luck. His whistling hung in the air as he went but he would not be whistling once he boarded his trawler; again it was believed that this would  ‘whistle up a storm’ and was bad luck. But he got that anyway. His trawler was sunk, all hands lost. His children’s lives went on, but they would never see him again.

My materials are very simple and straightforward. I used a cotton/linen Japanese Zakka fabric as my base material in a natural colour.

I chose this fabric because it has a smooth finish which paints well and, in its natural state, is a suitable colour for the flesh. It was sourced from Cotton and Vintage which is an Ebay shop.

For the stitching I use DMC stranded cotton which I buy at my local haberdashery shop and I also used some wool which was donated to me by a friend.

Once I had put the composition together on the computer, I made a very simple line drawing, really just a guide to show where everything goes. This was reversed and printed out (in A4 tiles), reassembled and then transferred to my fabric using free machine stitch from the reverse side of the fabric (so the stitching would be easy to remove on the front). Once the stitched guide was in place, the background of the piece was given  a layer of paint. All the drawing was done in stitch directly on the piece and the original machine stitch removed as it was replaced with hand stitching. The hand stitches used on the figures were straight stitch, cross stitch, back stitch and needle weaving (or darning stitch). The image has been built up in layers of hand stitch, machine stitch and paint with some painting underneath the stitch and some painted layers over the stitches, building up texture and ‘knocking back’ the stitch into the background. The bricks were originally painted in a terracotta ‘red brick’ colour . It was too dominant and didn’t work, so about two days before the work was going to a selection panel for its first exhibition, I took the brave step of completely changing the colour of the bricks and I also painted over the black ‘never forget’ lettering to give the effect of it fading, like the memory of their father, into the background. ‘The Unknown Statistic’ has been shown in three selected exhibitions : Sue Stone – the piece in situ at the Grimsby Minster 21 comments on “Sue Stone: From conception to creation”