Fiona Rainford: From conception to creation Fiona Rainford graduated from MMU with B.A. hons Creative Practice in 2015, 29 years after completing a City and Guilds Certificate in Embroidery.

She has exhibited with Prism Textiles since the group was formed by Julia Caprara in 1999. Fiona is also a member of Reveal:6, a small group of mixed media artists based in the north of England and a volunteer Artist in Residence at Lancashire Archives, where she spends time researching the old pattern books from local cotton mills.

In this article, which is part of our From conception to creation series, Fiona shares the research she did whilst creating her piece The Remains, inspired by an old woollen mill near Leeds. We learn about the materials and equipment used, and how drawing and taking photos helped Fiona complete the look. Name of piece: The Remains
Year of piece: 2016
Size of piece: Varies depending on the arrangement of the pieces
Materials used: Merino wool, some hand dyed and some commercially dyed. Strips cut from an old cardigan and waste scraps of felt from other projects for the centre of the objects.
Techniques used: Needle felting.

A process of regeneration

Fiona Rainford: At the beginning of 2016 the Reveal:6 group started a project to put together an exhibition inspired by Sunny Bank Mills in Farsley near Leeds. This is an old woollen mill which originally produced fine, high-quality woollen fabric which was exported all over the world.

Since the looms fell silent, the mill has been going through a process of regeneration and are now houses, offices, creative businesses and a gallery. As well as regular exhibitions there are courses, workshops and an excellent archive.

I visited the mill twice. This included a visit to the archive and a tour around parts of the former mill which had not yet been redeveloped. I was very interested in these older parts of the mill as my work has often been related to places and objects which record the passage of time. The areas of decay recorded the results of the many years of use of the remaining artefacts and buildings, and also the accelerated decay after the closure.

I went about the mill collecting as many images as possible so that I could consider what I was going to use as the inspiration for the work to be included in the exhibition. I often draw from my photos or I just use them as a reminder of forms and colours.

I was initially attracted to the old ledgers and the files of dye samples in the archive but as I toured the abandoned weaving sheds I became more interested in the piles of old rusting machinery parts and other remnants of the manufacturing process.

There was not enough time on my visits to sketch on site so I came away with lots of photographs to consider at home. 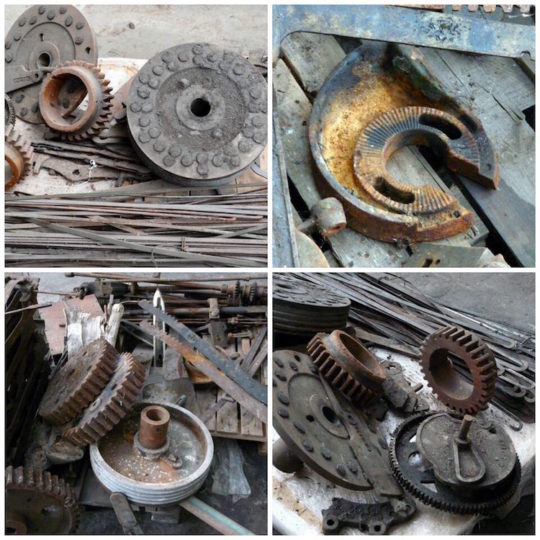 I sifted through the photos and started sampling different ideas. I usually experiment with different techniques before I settle on a final idea.

First I played with the shapes of the reeds from the looms, using digital stitch. I also played with layering the stitched images in photo apps. I also considered the marks of wear and tear on an old wooden bench. These marks suggested hand stitch. I had seen some old Jacquard loom cards in the mill so I experimented with some I had at home. Next, I experimented with some waste felt fabric I bought in the scrap store at the mill. I thought that this could suggest a tangle of old cogs. With the exhibition date looming, it was time to decide on a main piece of work. I had to focus and set aside some of the ideas to use in the future.

I still didn’t have a piece of work I was completely happy with so I decided to return to the needle felting process I had used in some previous work and make a collection of 3D pieces that bore a relationship to the old machine parts which I had seen in the abandoned weaving shed. Using wool in a rusty colour seemed appropriate.

Using what comes to hand

I decided to start with one cog. Because I have done a lot of felting in the past, I have a large supply of fleece so I selected a mixture of commercially dyed tops and some fleece I had previously dyed with a mixture of onion skins and New Zealand Flax seed pods. I normally prefer fleece batts for needle felting but if the colour is right I just use what I have to hand. Because I like to recycle old clothing I used a worn cardigan cut into strips to make a coil shape on which to start felting with my single needle.

I needle felt with a single needle because this is the only way I can create the shapes I want. It is an enormously time-consuming process to get the wool to the degree of firmness and smoothness which I want. However, it is a process which you can do while sitting watching TV in the evening, providing you keep your fingers out of the way of the barbed needle. I made three cogs to start with and then began to think about how these would be arranged. Looking at the cogs, I decided that I needed to include some different shapes but still allude to the cogs. The new shapes were created working intuitively. I often draw my 3D constructions once they are completed and take photos of different arrangements when I am deciding how to arrange them. The arrangement was recently shown at the Reveal:6  Traces exhibition in the gallery at  Sunny Bank Mills and has now been purchased for the Mill collection. I still have a body of images and ideas which may be developed further when I work on future mill projects.

3 comments on “Fiona Rainford: From conception to creation”