Sue Stone is a UK artist, based in Grimsby, who studied Fashion at St Martins School of Art and then Embroidery at Goldsmiths College in London. Sue is current chair and exhibiting member of the 62 Group of Textile Artists and a Fellow of the Society of Designer Craftsmen . She is also Mum to textileartist.org’s Joe and Sam Pitcher.

Sue’s work has been widely exhibited throughout the UK and Europe and also in the USA and Japan and has its own distinctive style. As a mainly figurative hand embroiderer, drawing forms an important part of her practice but instead of a pen or pencil, Sue usually employs a needle and thread. Having spent 28 years designing womenswear her affinity with cloth shines through in the textural and patterned areas of her work.

In Autumn 2016 she will be a featured gallery artist at the Knitting & Stitching Shows,UK.

In this article, part of our creative development series, Sue examines where she finds the inspiration for her work and how it translates into her stitched textiles.

The light and shade in our lives

Sue Stone: My work may not always be about what you think you see. I was lucky to have had an art school education were I learned to look and discovered that ideas can be found anywhere and everywhere; they are all around us. Go out and observe for yourself and don’t forget to look down as well as up. The pavement is a treasure trove of incidental marks and a rich source of pattern and texture.

The work I make is about what I have experienced and how it has affected me; my relationships, my life observations, my environment. I look at the past and the present, my family album and my childhood. Inspiration for me comes from the heard as well as the seen. I have had 2 distinct periods of making art work, one in the 1970s and the second from 2003 onwards. The gap in between has provided me with many life experiences on which to draw; some happy, others sad. We all need light and shade in our lives so I continue to swing from the serious to the humorous whenever I feel the need to. A look inside the family album

People are an ever fascinating subject for me and my number one source for inspiration is the family album. Looking inside awakens my imagination and sparks ideas. Usually the characters I portray in my work confront the audience face on, looking out and inviting a conversation between viewer and maker.

The passing of time, the transience of life and my own personal experience that my life is just racing by are dealt with by merging disparate images from the past with those from the present, making a connection between people, place and time.

The trigger for a new piece of work can come from any aspect of the old photographs I find in the album including the composition of the snap itself or the character of its subject within. The photographs I like best are the small, faded sepia or black and white photos with very little information in them. These give me the scope to use my imagination to create partial narratives that leave to viewer to draw their own conclusion. The images of my family are used to explore my own relationships. My mum, my dad, my grandparents, my sister, my husband and my children have all been featured in my work. The fascination of the unknown

I am even more intrigued by the images of the unknown characters that we all seem to have in our albums, the people who no-one seems to know. I often use these images as a device to portray the past. Working with the family album is also a way of remembering who I am and where I came from.

In 2013 I made a series called Snaps from the Family Album. The snapshots, mainly of groups of people from the album were used purely to explore patterns and textures. The colour palette was deliberately limited to concentrate the mind on the stitched areas. My interest in an unknown subject goes beyond the visual. I ask who these unknown characters are and why they are there?

The collected detail • Look up, down and all around

It’s the often overlooked, intimate details that I rejoice in finding when I am out and about, rather than just enjoying the general landscape. I am an avid photographer who collects images as an aide-memoire for my work and I have a vast library of thousands of photographs to draw on. Many have been taken on my travels around the UK and beyond; a visit to Seville in 2015 proved very fruitful. From glass blocks in Haworth to Moorish tiles in Seville, they are images I can refer to time and time again. Texture and pattern details can be found a few minutes from the front door. Take a look at architecture, patterns found in cobbled streets, incidental, accidental marks, or the ghost of a building on the side of another. I am particularly fond of walls; there are so many types of bricks and stones and beautiful, subtle colour palettes. 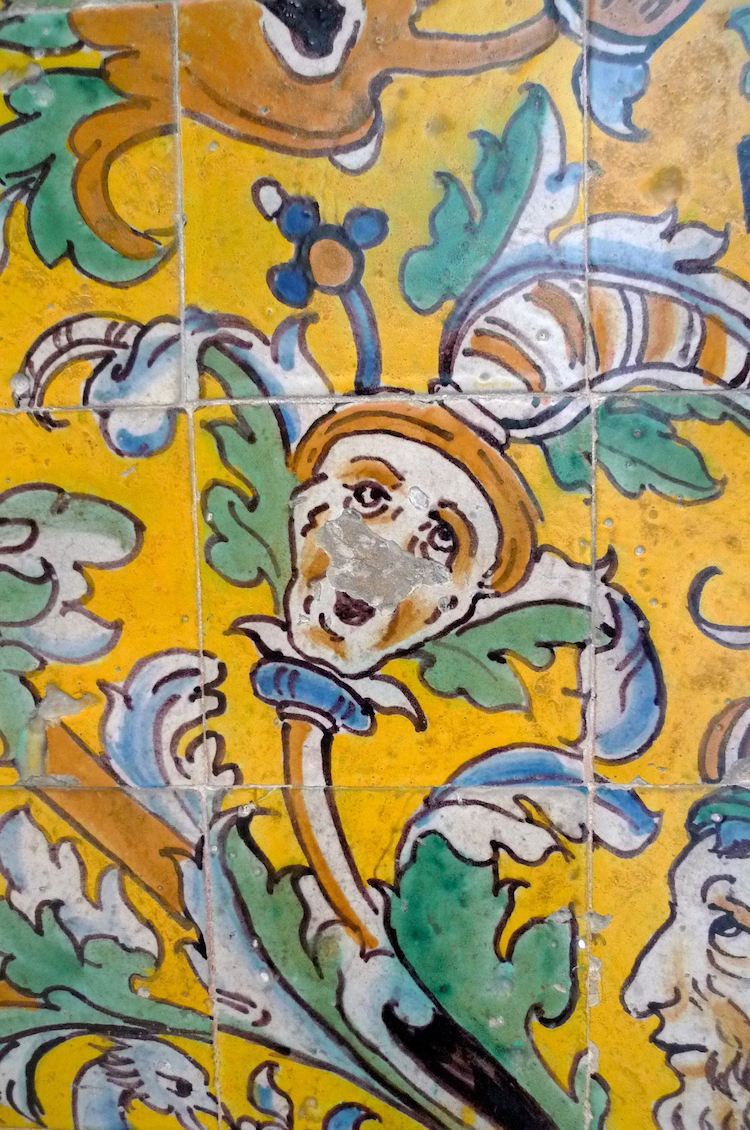 The east end of London

The street art and graffiti in the East End of London also form a rich source of inspiration and I often use street scenes as settings for the people who inhabit my work.

In my piece The Girls Go to London Town I have merged an image of three Grimsby Girls, my Mum and two friends on an outing with an image of an East End Street, just off Brick Lane. I was attracted to all the textures and patterns in the image of the London street I had captured and it immediately suggested stitches to me. The feel of cloth in my hands

Touch is the reason why I stitch, holding and manipulating the cloth in my hands is an important part of the making process. My Mum trained as a tailor and made men’s and women’s suits for a living before she married. As a child I used to play with my Mum’s stash of fabrics and an early memory is the smell of the tweed fabrics and the feel of the cloth in my hands as I folded and refolded it and matched it up with buttons from the button tin. I moved on to playing shop and then to designing and making clothes for my dolls. I still hold an affection for these traditional fabrics. The clothes that my characters wear are an important feature of my work. In the present I stitch the complex woven surfaces and designs and it takes me right back to my beginnings. Sue Stone, The girls who made the suits

Let us know what you think about our creative development series so far by leaving a comment below.