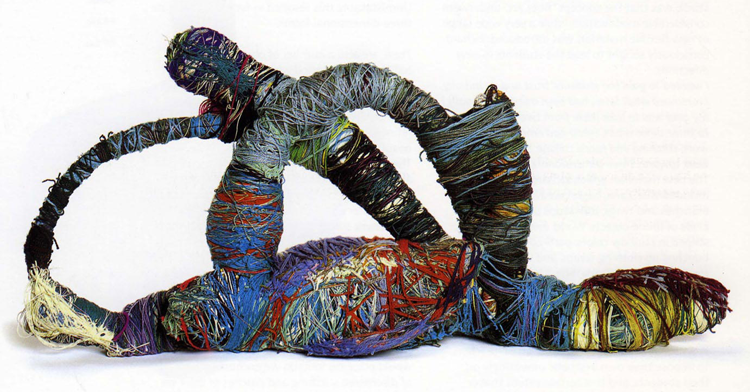 Two girls. Conceived in the same moment. Born within minutes of each other. Indistinguishable in many ways. But for one defining difference. In the 1940s, in a society that deemed their distinctions insurmountable, their eventual separation may have seemed inevitable; that is to everyone except the twins themselves. This is the story of Judith and Joyce Scott; how they were torn apart, the pain of separation and how their undeniable bond and eventual reunion healed life-long wounds and, against all the odds, sparked the immergence of a extraordinary talent. A talent that would see one of them become a world-renowned fiber artist. Born in 1943 into a middle-class family in Cincinnati, Ohio, Joyce Scott was a healthy baby. There was no reason not to assume that she would lead anything other than a ‘normal’ life. In fact, her life has been extraordinary, partly due to the fact that her twin sister, Judith was born with the extra chromosome carried by sufferers of Down syndrome.

In 2011, speaking on the BBC Culture show, Joyce explained how she and her sister were inseparable in the early years; ‘We played in the same space, slept in the same bed, we did absolutely everything together”.  Their three brothers provided little distraction from each other’s company. They would while away the hours in what seemed like an idyllic existence; inventing games, digging in the sandbox and holding make-believe tea-parties.

But as the years passed, differences in their development began to manifest. Whilst Joyce began speaking, Judith could produce little more than babble. All around assumed Judith was irreparably retarded. It wasn’t until many years later that the reason for this inability to find a voice would be diagnosed; Judith had been left profoundly deaf by a bout of Scarlet fever in infancy.

Her deafness undiagnosed, Judith failed to qualify for the only public school class for children with learning disabilities. It is likely, in hindsight, that she simply couldn’t hear the questions being put to her, but the entry-test provided further evidence of Judith’s retardation and she was deemed to be ‘uneducable’. From that point onwards, pressure from doctors and psychologists began to mount. It was practically unheard of at that time for children with severe disabilities to live with their parents. Judith’s mother, Lillian, was faced with a heart-rending decision.

In the Autumn of 1950, when the twins were 7 and a half years old, Joyce woke to find her sister gone. In the months that followed her parents descended into a state of guilt-ridden depression and despair, but nobody felt the loss more profoundly than Joyce. It was as if one half of herself had been abruptly ripped away, leaving her bereft, lonely and with an irrevocable sense of emptiness. Indeed, the remainder of her childhood became a quest to fill the void left by her sister’s absence.

As a young adult, sub-consciously seeking to heal the wound left by the loss of her sister, Joyce spent her time caring for other children who had been tarnished by society with the label ‘outcast’. Even this did not bring peace.

All those years earlier, Judith had become a ward of the state of Ohio and had since been living in institutions for the disabled and discarded. These were not forward-thinking establishments and the ‘care’ administered was perfunctory at best, but often cruel and violent. The official records state “Judith does not seem to be in good contact with her environment. She does not get along well with other children, is restless, eats messily, tears her clothing, and beats other children.” Joyce recalls another document stating that on one occasion Judith had shown an urge to join in with other children who were drawing on pieces of scrap paper, but was told she was ‘too retarded to draw’ and had her crayons confiscated.

Against the wishes of their mother, Joyce eventually sought out Judith and would visit her in the institution. Her daughter Ilana would accompany her from time to time and remembers “cold floors, people yelling. Judy was just sobbing the entire time we were there”.

After many years of heart-ache, Joyce took the decision, after further objections from her mother, to become Judith’s legal guardian. She describes the moment as ‘epiphanal’. It was not a straightforward process; negotiations were drawn-out and difficult. But finally in 1986, a period of deep-healing began, when Judith moved to California to live with Joyce and her family. Joyce enrolled Judith at the Creative Growth Art Centre in Oakland as a means of occupying her time; Joyce was working as a pediatric nurse so 24-hour care of her sister was impossible.

Creative Growth is a visionary arts centre where people with mental or psychological difficulties are given total artistic freedom. Joyce Scott describes it as ‘joyful’.

For nearly two years, Judith was unresponsive; she didn’t enjoy painting, sculpture or sewing. But one fiber arts workshop with the textile artist Sylvia Seventy changed all that. Finally Judith had discovered something she loved, and what’s more, something for which she had an innate talent.

She spontaneously started wrapping pieces of wood in fiber, fabric and threads and created her earliest pieces, since referred to as ‘totems’.

From then on she didn’t stop. She was constantly creating. Her process was erratic and instinctive. She would wrap thread and yarn around anything she could get her hands on; she appropriated magazines, chairs and even a bicycle wheel. It quickly became a source of communication for Judith, having been verbally and socially ‘blocked’ for most of her life. Tom di Maria, director of Creative Growth, believes she was finally ‘learning to speak’. Her early pieces were her first words.

Her gift was recognised and encouraged by the staff at the Creative Growth Art Centre and Judith was given free-reign over the studio. No object was out-of-bounds. She would work on a piece for days, weeks, even months. She became more and more focused and would not allow interruption or distraction. She also became more discerning in her selection of threads and yarns, considering various hues and shades, wrapping the treasure she had gathered until she alone decided a piece was complete. At that point she would brush her hands together and push the piece away.

But she was not only uncovering a long-hidden talent, Judith was also finding herself. Having found a voice, she became more confident. She began experimenting with extravagant clothing and accessories. Her work-cycle was constant; five days a week for eighteen years. She produced over 200 cocoon-like sculptures in that time, many of which can be found in international museums and private collections. Some are small and intimate, others almost unmanageable in size.

Her work is an abstract reflection of her life. The colourful, idyllic childhood, the loneliness and isolation of institutional care and, above all, the connection with her sister Joyce; one piece is widely believed to represent twins reaching out to one another. 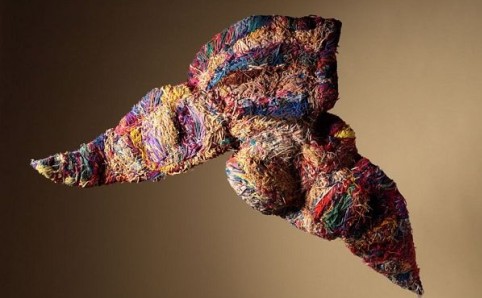 In 1999 the first exhibition of her work coincided with the release of John MacGregor’s book Metamorphosis: The Fiber Art of Judith Scott. This was instrumental in introducing her work to a much wider audience and propelled her to international recognition as an ‘outsider’ artist. Eventually though her disability became secondary to her art and her work became celebrated on its own merit.

Judith became the first ever artist with Down’s Syndrome to be featured in the San Francisco Museum of Modern Art. Her work can still be seen in permanent collections in New York City, Paris, and London.

Judith Scott passed away in 2005, living 49 years beyond her predicted life-span. She died in the arms of her sister Joyce. To find out more about Judith and Joyce Scott visit JudithandJoycescott.com

Which textile artist (living or dead) would you like to learn more about? Let us know in the comments below.