Best known for creating beautiful quilts chronicling significant events, Joseph “Sunshine Joe” Mallard was first introduced to quilting by his great, great grandmother as a young boy. His own quilting adventure began much later in the 1970s.

Joseph has always been passionate about sharing his artwork with anyone that would listen. Having spent time in many different cities across the United States, he has developed a knack for attracting crowds and creating dialogue around his work.

In this interview, Joseph Mallard talks about learning from his great, great grandmother, how he was inspired by Rosie Greer, and the more than 630 references on his quilt documenting Barack Obama’s first term in office.

TextileArtist.Org: Talk us through your first experience of quilting.

Joseph “Sunshine Joe” Mallard: When I was in elementary school in Summit, Mississippi, I was a very skinny boy. Although I was very outgoing and seemed to have lots of friends, I was not good at playing sports. I remember when the other boys were choosing sides to play basketball or football, no one wanted me on their team. During those early years, I would walk home alone after school feeling rejected. I would always find my great, great grandmother, who was a former slave, sitting on the front porch making quilts.

She used colorful pieces of fabric from flour sacks, old clothes and any material she could find. She never used a pattern, but she made some of the most beautiful bright colored quilts one could imagine. I watched her quilt every day. She would allow me to thread her needles and she would tell me stories about slavery. But the inspiration to create yourself came much later, didn’t it?

During the late nineteen sixties and early seventies, I was living in Connecticut and saw Rosie Greer on television doing needle point. Watching that famous football star doing needle point took me back to my childhood days when I watched my great, great grandmother making quilts.

That was the day I went out and purchased a package of embroidery needles, several skeins of embroidery floss, and a pair scissors. I began creating designs on denim jackets for my two sons. My friends liked the designs and asked me to make designs for them. Chronicling a long period of time

Specifically, the piece you’ve created to document Obama’s first term in office – why did you feel it was important?

I thought it was important to the study of material culture in that it would be an example of a quilt as chronicle, a description of its maker’s life over time, as it unfolds. Quilts have traditionally been created to commemorate a single event in time, either past or future, such as a wedding, birth, death, arrival or departure from a community, political or military campaign or an election. They have also been used to illustrate a historical period or a snapshot of time in the past. However, relatively few examples exist of quilts that have been created for the specific purpose of chronicling a long period of time as it is occurring.

Because Mr. Obama is the first African American President of the United States of America, I thought it would be important to capture events that happened around the world during the first four years of his administration.

There are over 630 references in that piece. Can you talk us through 4 or 5 of the most significant or unusual? Apart from the piece we’ve already discussed, which other quilts you’ve created hold particularly poignant memories and why?

My most recent quilt is in progress. The title of the quilt is “The other side of the American Dream.” It addresses problems young people face in our society today. The word “Bullying” is front and center. Nearby is the image of a young man on a skateboard carrying a can of spray paint, ready to spread his message with graffiti. Words of reform are embroidered around the young man encouraging mercy and peace. 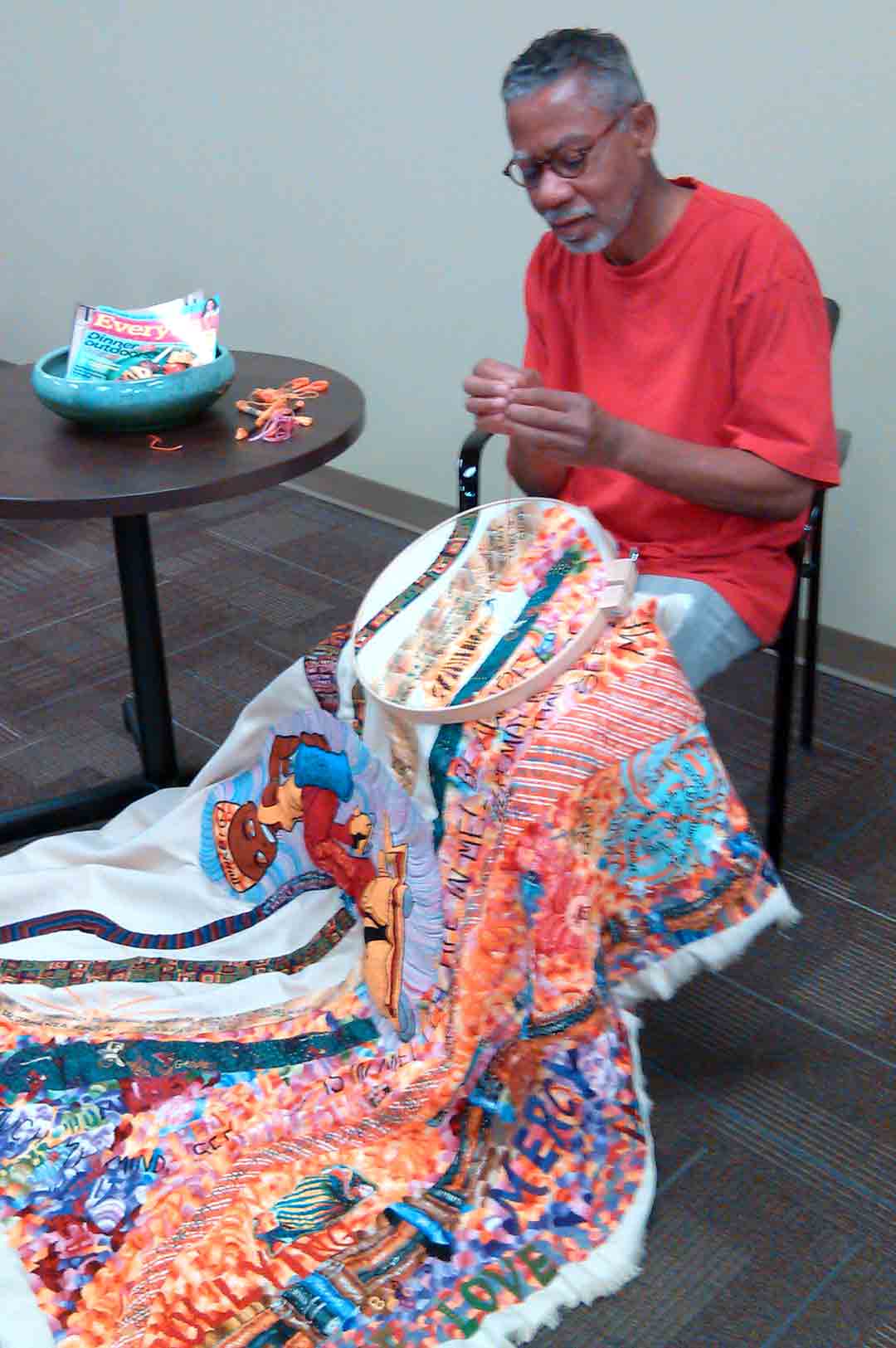 How did the American Quilt Study Group come about and what is its purpose?

The American Quilt Study Group establishes and promotes the highest standards for interdisciplinary quilt-related studies, providing opportunities for study, research, and the publication of work that advance the knowledge of quilts and related subjects.

Joseph “Sunshine Joe” Mallard takes a very unique approach to quilting. Did his idea to chronicle events through quilting resonate with you? Let us know your thoughts with a comment below.